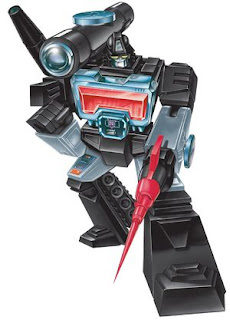 Once the Military Consul for the Decepticon domain of Mebion, Magnificus was framed and convicted thanks to a crafty trap set by Decepticon command staff who were jealous of his position.  He was ousted and sent to be a pit-fighting robot in a remote region of space.  His partner Ga'mede was a member of the royal family of Xeptos, a planet existing a subatomic inner space, but just as he was to be executed over a family dispute, he was rescued into the macroverse thanks to Magnificus' matter-enlarging scope.  The two were bonded almost immediately by implicit trust owing to their similar circumstances, and have crossed numerous battlefields and parts of the underworld together.  Their travels have gained them a suitable stock of wealth and armaments, with which they carry out a campaign of heartless revenge on the traitors who brought Magnificus low.