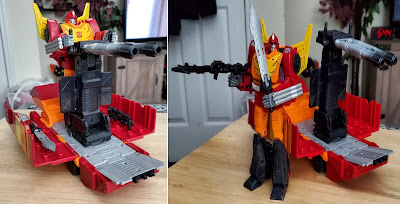 Rodimus Prime is one of my favorite Transformers characters. Like Galvatron, after his introduction everything changed for the better. His latest figure is a large Commander Class figure that the Mrs gave me for Christmas. She knows how much I like him and this is one impressive gift. Like the Kingdom version of Galvatron, this Rodimus Prime works as both a Generations and Studio Series version of the toy. It's also a very pleasantly chunky robot toy that I had a lot of fun with. As you'd expect, Rodimus turns into his trademark Winnebago of Doom. What you probably didn't expect was the front 'cab' portion separates into the car Rodimus changed into as Hot Rod. As a kid, this is what I wanted the original to do. In a way, it makes him more like an Optimus Prime toy when the cab separates from the trailer.

The 'trailer' portion of the alt mode converts into a battle platform similar to the original toy. Now, however, the cannon is detachable and has treads for movement. It can be used as a portable weapon as well. There's plenty of connection ports in the battle deck for various Weaponizers and other add on fun. Rodimus comes with plenty of those energy action effect thingies, they make good blast effects for the cannon. Rodimus himself is contained within the car. This leads to my only dislike about the toy. I hated transforming it. He's a pretty tall robot that unfolds out of that car in not the most graceful manner. The end results are great, but the trip from A to B was a nightmare.

Transformation aside, in robot mode Rodimus is very sharp looking and well articulated. He has some great accessories including his Photon Eliminator rifle, Sword of Primus, and a Matrix of Autobot Leadership that stores nicely in his chest. There's even one of those energy effects thingies just for it! There already has been a Masterpiece Rodimus toy, but I am WAY more impressed with this figure than that one. There's even removable smoke for the smoke stacks! This is one of those toys that feel proud to own, like it could be a showcase piece. I've been really happy with Transformers toys in general over the past few years and this definitely is a solid example as to why.