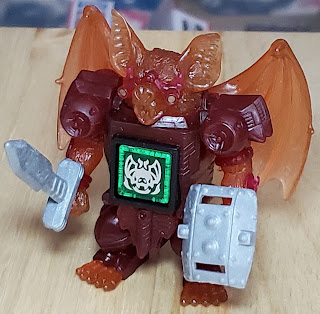 One of my favorite Battle Beasts/Beastformers is Blitzkrieg Bat/Devil Bat. Our weekly look at Beast Saga is Morick Bat Burst, the modern day update of that very bat. Admittedly the reason I picked him was because he fit the early year spooky vibe I always fall into and I'm not one bit ashamed of that. In his Burst colors, Morick Bat is translucent orange with dark red armor. These fiery colors make me think of Red Arremer or Satan from Ghouls 'N Ghosts. He's packing a sword and shield, by now you're probably recognizing these. The same handful of weapons molds are heavily used in the line. I don't mind it at all, though the original's axe would have been nice. Instead of Devil Bat's cybernetic eye patch, Morick Bat is sporting some cool goggles. The goggles are a lot cooler even though the eye patch is certainly part of that look. He's an update of sorts, but not the same character. Though in these colors, I can see him flying around breathing fire.