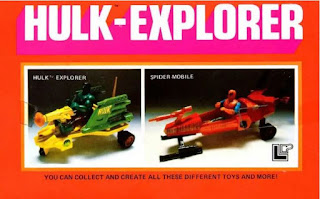 One particularly I enjoy about Transformers is the trivial associations. Due to the nature of it's creation and history, Transformers as a brand has formed quite the iceberg so to speak. Even the official mainstream stuff is in murky waters making it more of a lost continent than iceberg. One such dark corner is MEGO. It's pretty common knowledge to most fans that Microman was one of the toy lines used to initially create Transformers. It's also fairly well known that MEGO drew from that same well to create Micronauts. What may not be as well known is what else MEGO did from there.

Companies often reuse existing resources. While it may rub some the wrong way, it's just smart business. It's not much different than you using the same bottle of Tylenol for a different problem than you first bought it for. Things like toy molds are very expensive and usually easy to use again. MEGO for awhile was a pretty popular toy brand before they went into a downward spiral. Aside from Micronauts, their Pocket Super Heroes sold well.