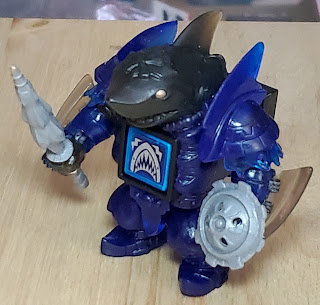 This week in our ongoing look at some 'Burst' versions of Beast Saga toys is Killer Shark. I probably don't have to explain why he'd be named that combined with the photo. Killer Shark is one excellent looking figure. He's the update to Sawtooth Shark/Badshark for the the Beast Saga era. It'd be great if there was an update of the Shocking Shark Transport Station to go along with him. Just look at that thing, it's awesome.

In this Burst version, Killer Shark could be an entirely different character. The black shark with dark blue armor is so vastly different from his normal deco. I almost expect this to be a 'nemesis' version. Regardless, he looks cool. The shark head with the fin armor is just too well executed. Speaking of his burst colors, the translucent plastic works really well here. The shield and lance weapon are a natural fit, though I'd love to have seen a trident or spear. What about a harpoon gun?