I haven't built a Gundam model in a while and the bug to do so again hit me pretty hard recently. My wife sensed this and bought me a few for Christmas leading us to today's post. I used to build them quite a bit along side Zoids, it's super relaxing to do with the TV on in the background. Gundam is one of those things I don't know a super lot about, but really appreciate as a whole. Going into this G Frame kit, I had assumed it was like other models and got my nippers out only to discover they weren't needed.

Each part is already separated ready to be placed on either the G Frame or display frame. The G Frame being the main reason for my interest in this one. It's a super articulated skeleton that the parts plug into creating a hyper possible figure. The Display Frame is a much more static skeleton for a basic display version of your Gundam. The Display Frame also converts into a stand to show off your figure. Neat huh?

The GAT-X103 Buster Gundam is mainly from the series Mobile Suit Gundam SEED. It's an artillery mobile suit developed by the Earth Alliance G Project. My interest is in those big guns, it looks cool. The Gundam has a backpack that holds them and fold out allowing for dual gun combat. The rifles can then be removed and combined for an extra long sniper rifle. If that wasn't enough, the shoulders also contain missile launchers.

The GAT-X103 Buster Gundam is one cool looking robot with some big ass guns. I'm also a fan of the green and red colors. The G Frame system was fun to play around with and I spent hours doing so with paranormal TV on in the background. It was a good time. I'm definitely going to pick up others in the future. 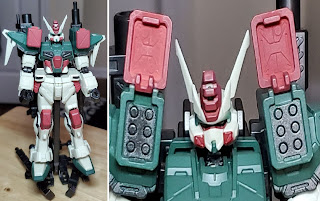