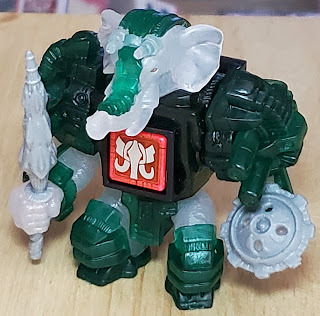 This week in our ongoing exploration into Burst Beast Saga figures is Eledram (I have seen him also called Eledrum) Burst. Who as you can see is an elephant. Eledram is the Beast Saga update of Sledgehammer Elephant/Elephan and he came out pretty great. No doubt about it, he's a tank. Broad shoulders and big frame with cannons on his shoulders. I like the little goggles pulled up on his forehead. You can tell Eledram pulls them down when charging into battle. For a change, the update's weapon is an update of the originals lance. All of the elephants in this family tree carry a version of that, though Eldram also has a shield like most Beast Saga figures. His dark green armor really stands out against the white elephant parts and just looks great in that translucent plastic. This is a really good figure.