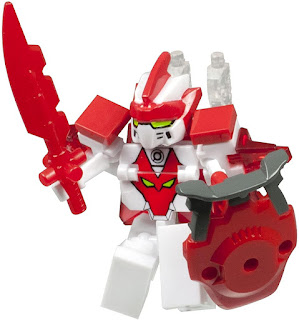 Not everything is a big hit. Unfortunately Tenkai Knights falls into that category. Tenkai Knights was a toy line and anime centering around a group of kids who'd cross through a portal to Planet Quarton. Going through this portal would change them from normal kids into the Tenkai Knights where they'd face Lord Villius and the Corrupted Army. The cartoon would shift from 2D animation to 3D when they Tenkai Knight action started. It was a fun show that admittedly used a lot of genre tropes. There was even a dark version of the main hero Bravenwolf. I watched it pretty regularly while it was on and fondly bought the toys. There was video games I kinda regret not checking out.

They made for a solid counterpart to Kre-O Transformers at the time. If robot mini figures are your thing, it was a good time. I am and it sure was. They seemed to sell well in at my stores, though after a year the line just kinda fizzled out. That's a shame. Like I said, it was a fun little line. I'd love to see a return one day or even something similar find it's way out. I'd be great to swing by the store for some cat food and grab a few while there again.