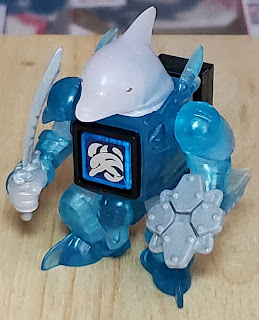 Today we're ending our weekly look at the Burst series from Beast Saga with Dolphin Burst. I've also seen him called Dorufan and Dorfan. Dolphin is one of those Beast Saga characters who doesn't seemingly have a Battle Beasts/Beastformers predecessor. New characters are always good! Dolphin's colors aren't very different from his standard figure, but I do prefer the translucent plastic. The blue armor looks like water and the simple colors look more dynamic. Dolphin is carrying a sword and shield combo like most Beast Saga toys do. Being a nautical based character, he of course has a pirate style scimitar. His shield though is a unique combination of geometrical shapes that looks pretty neat. I can see him using them on an Atlantis inspired city.