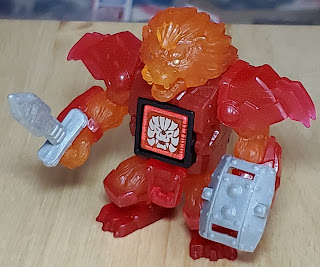 This week in our look at Beast Saga figures from the Random Booster v1 series is Raioga Burst. As the name implies, this is the Burst version of Raioga who is basically the main character of Beast Saga. Think of him as the replacement for White Leo/Pirate Lion for a new era. That's how I think of him anyway. Like other Beast Saga figures, Raioga comes with a few dice to use with his chest launcher in the battle game. He's carrying a sword and shield with the usual amount of Beast Saga articulation. I particularly like the orange and red colors of this Burst variation. It makes him look like some sort of fire version, not to mention it just looks in translucent plastics. I particularly like the claw themed armor Raioga is wearing as well. This is an all around great looking figure.