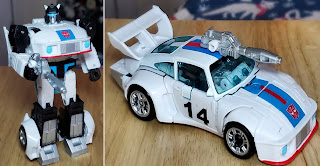 Jazz has been sitting in my backlog for quite some time now. He's one of those characters I've always liked and usually get new toys of. Each time there is a new Jazz figure, it seems to be a vast improvement over the last. That trend is certainly continuing here with one very good figure of one of the Transformers more iconic characters. Studio Series has been generally great in general and these 86 offerings have been excellent.

As you'd expect, Jazz turns into his trademark white Porsche with a robot mode that looks like he walked off a TV screen. The toy is well articulated, everything moves as it should. At some point I'm going to be disappointed in a Studio Series figure, but that isn't the case with Jazz. He has his trademark Photon Rifle. I wish he also had the rocket launcher, but if I can only have one weapon it's gonna be the gun. I almost feel like this is a transforming version of the Action Masters Jazz. If only the black parts were blue. Pair that with a new version of the Turbo Board and you've got at least one customer.