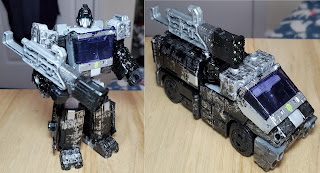 There are some really good characters in the Transformers universe. This isn't one of them. I'm not being sarcastic, for you see the Deseeus Army Drone are literally just Drones used under the command of the Quintessons. This one specifically works for Deseeus, though I'd like to think the other judges have some as well. Going by the original cartoon creation story that the Transformers were created by the Quintessons before miraculously gaining sentience, it only makes sense that they'd have some non-living ones still in use. Not to mention, drones make for good generic soldiers and this literally is just that. If it looks familiar, that's because the Drone is a straight repaint of Siege Ironhide.

The Drone is a silver/grey robot with a lot of black undercoat. Clearly the War for Cybertron has caused some paint damage. The Cybertronian vehicle makes for a cool sci fi alt mode and with the gun mounted on top, it looks like a solid military grade vehicle form. Several of the Siege molds had that Diaclone flair and it works pretty good here. Really, I can't think of a better mold to use for this idea. I liked the Siege Ironhide mold a lot. I liked Siege a lot in general so it's nice to revisit it. The rifle can convert into a sledge hammer for some melee combat. Really, this is just a solid Transformers toy. The mold has gotten a lot of use and each time felt fresh. There's plenty of articulation and it looks the part. Deseeus Army Drone may have a funny name, but it's a great idea.