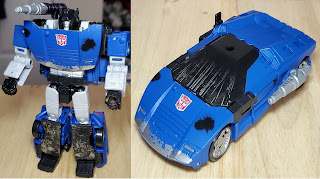 Deep Cover is one of those characters who's been around for awhile but is just there. Literally a repaint who serves as only a background character. I'm not complaining though, because he's a cool repaint that pays tribute to Transformers history. Originally Sideswipe was made from a Diaclone mold which came in a few different variations. Deep Cover originally was a E-Hobby exclusive made from the early 2000's Sideswipe re-issue based on a version of New Countach LP500S.

With all of that talk of different versions and repaints, I didn't talk about this toy very much. That's because it's another repaint of a toy that's gotten quite a lot of repaints. Deep Cover is based on the Siege Sidewipe mold which is a very good toy. I'm generally fond of Sideswipe toys and I liked Siege a whole lot. It's nice to revisit Siege and one of my favorite molds from it in such a cool way.