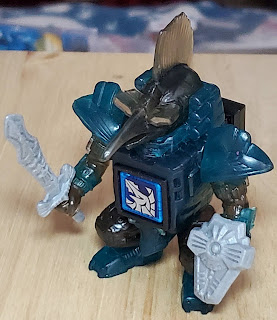 Back in 2018 at Toylanta, I was fortunate enough to stumble across a dealer selling Beast Saga figures at a really good price. He had several figures from the Random Booster vol. 1 Burst Collection set and I bought one of each. I think Shawn and myself revisited his booth a million times hoping he'd add more to the box. While we didn't have any luck with that, we did manage to each complete a set. They've been in a plastic storage container on top of a drawer I use for mini-figures and off keshi storage ever since.

Something inspired me to take a look at each one here.

Bill Sword is a sword fish. That's the kind of animal that seems like an odd choice at first, but then makes plenty of sense. I mean, it's a BATTLE Beast right? A weapon is implied in it's name. There was even a few in Beast Wars, it makes sense. Here though, he seems a little silly. Probably because a slight resemblance to Gonzo The Great a little. Still this is a great little figure. Beast Saga figures are a little bigger than a normal Beastformer/Battle Beast. They also have articulated legs in addition to the dice launcher. It's a more complex figure with a more complex game. The Burst versions came in very nice looking translucent colors. I really like translucent plastic, but it does get fragile over time. Beast Saga figures are made from a more rubbery grade, so that won't be an issue. Bill Sword is a weird little guy, but still a pretty cool dude.