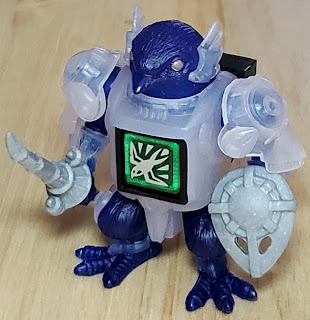 I don't claim to know everything. Bamed is a good example of that, I was fairly ignorant of the character. Upon getting this burst version of him, I assumed it was an update of Pugnacious Penguin. Probably because of the translucent colors look icy on a slightly pudgy bird. However it's a different character whose normal deco looks a lot like the little birds I take so much joy in watching eat from the bird feeders on my front porch. In the end, it's not a bad trade off.

Bamed as we've spoken is a bird based beast whom battles and looks wonderful. Especially in these burst colors which look so good! The cool lance style weapon and shield have a pleasant speckled look that go along well with the icy translucent colors. I felt it was a natural fit for Christmas week. Beast Saga figures are larger than older Beastformers/Battle Beasts and offer a little more articulation. Instead of just arms, the legs and sometimes heads also move. Not a lot, I know, but it's just enough for a toy of it's size.

They have a dice based game instead of the heat rub symbol play of the older toys. Each comes with various dice that are launched out via chest gimmick. I don't know how to play the game, but find the characters symbol side charming enough for display purposes. Bamed doesn't have a name that naturally rolls off my tongue. Sometimes I see it translated as Bamet. Which may or may not be the correct name, but I see Bamed more often. The other day some of those little birds were fighting over one of my feeders. I can see Bamed on a Sunday morning running off a red bird for some choice sunflower seeds.