With a yellow Spoiler and red Helmet 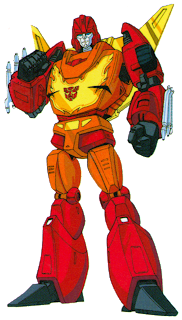 I've always been partial to Rodimus Prime. There's something about a cocky hot shot that turns out to be the chosen one who has imposter syndrome. I think we all can relate with being suddenly thrust into an important role and plagued with self doubt. It's an analogy for growing up as a late bloomer, something I can definitely relate with. I also think he looks cool.

It's hard not to like that mixture of orange, red, and yellow. The Winnebago of Doom alt mode is pleasantly weird too. In either the aerodynamics of it's original design, or the more blocky military-esque recent looks. It's just a neat vehicle. As much as I love the original years of Transformers with it's hybrid of Diaclone and Microman designs, I do favor the space opera post movie years more. Being raised on an unhealthy diet of Star Wars will do that to you.