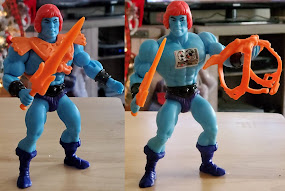 Faker is another MOTU character I wasn't concenred with as a kid. He was just this oddball evil blue He-Man clone that wasn't given much focus. Not to mention, he pretty much flew under the radar. Honestly, I don't remember ever seeing his toy at the store. As an adult toy collector, I'm aware he was just case filler and the most blatant repaint in the line. Also as an adult, I fully recognize just how awesome he actually is.

Depending on the fiction Faker is a robot either created by science or magic. I like the magic origins because it makes him seem like some weird Eternian Golem. This new toy follows the Origins model perfectly in that it's literally a blue He-Man with red hair and an orange Skeletor outfit. Of course there's the requisite sticker of all his circuitry. How else would you know he's a robot? He has the 'vintage' He-Man head that comes with some figures on the standard He-Man Origins body. There's a ton of articulation included with that. Of course he's sporting his orange take on Skeletor's outfit with a fake orange version of the Power Sword. There's a Powercon Exclusive version of Fake with a slightly different deco and Dupli-Cat. Dupli-Cat is his evil robot clone of Battle Cat. The pun based names never end... thankfully. It's hard not to like Faker, he's a Halloween colored evil robot clone of He-Man that relishes in it's ridiculousness. In the included mini-comic of this wave, it's shown that Skeletor has an army of Faker clones. There's not one fiber of my being that doesn't love that.