I tried to think of the most harmless thing 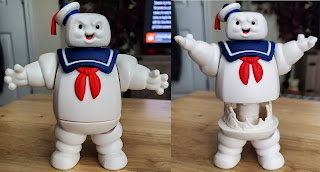 I finally found the new Fright Features Stay Puft Marshmallow Man last week. I say finally because it took a long time. I know that's obvious, but sometimes you really have to explain things. Now got to find Winston with Slimer and the kids! If I was really crazy, I'd look for the Ecto-1 with alternate box art. Not doing that, it's literally the same toy in the same box with the same art(just slightly different). Toys can be weird. What's weird in a good way is Stay Puft's Fight Feature. In fact... it's a little morbid. If you squeeze together those marshmallow man legs, his upper torso spins upwards while raising arms. Now the ghost has been pulled apart showing marshmallow cream seemingly made of Mini Pufts (potential spoiler?) and a spinal column made of jumbo marshmallows. I never knew the intestines of a Sumerian deity could look so tasty!