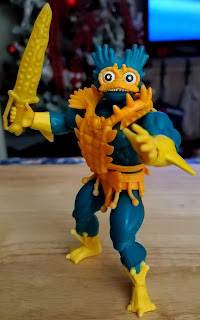 This past weekend the Mrs. picked up the Lords of Power version of Merman up for me. I've been trying to find these guys (damned elusive Beastman) and was very thankful for her efforts. If you didn't already know, Lords of Power was the original name for Masters of the Universe during it's development. These LOP versions are based on the mock-ups for the developing line. MOTU Origins is a very neat line like that, G1 He-Man stuff to the weirdest detail. However in the Masterverse line, they're doing the Barbarian He-Man. I honestly don't know what extent Mattel has in mind with all this. Either way it's super fun.

The most noticeable difference between this and the standard Merman is his head. The sculpt is more detailed and closer to his depiction in the original paintings. That old concept figure was mostly modeling clay meant to sell an idea. Details like the fishy bits stood out more as they were basically glued onto the base toy. Aside from that, Merman is the standard Origins figure with all the bells and whistles you'd expect. As an adult, I really appreciate the weirdness of classic MOTU. Merman is a good example of that.