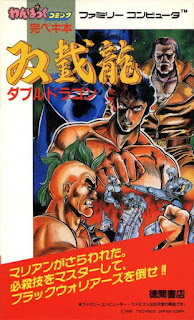 I was a big fan of Double Dragon as a kid. Don't get me wrong, I still love it, but back then... man. I'd draw the characters, play out adventures using action figures and so on. I still remember the first time I played Double Dragon. My brother and I would go to the neighborhood Circle K. We'd play the arcade games, eat candy, and drink Slush Puppies. It was a pretty popular place for kids in the neighborhood. Much to the obvious annoyance of the cashier.

Occasionally the games would be swapped out and one day there was new game called Double Dragon. It was unlike anything I had ever seen before (never played Renegade until years later on the NES). You had these cool guys fighting other guys, they could pick up things to hit the other guys with, and they all looked like Mad Max. It was amazing. I spent the rest of the day talking about it until I was finally told to not say another word for the rest of the night. Which I did and gt in trouble. I was surrounded by folks who never played Double Dragon. They didn't understand.

Soon enough I was hooked on the NES version and it's sequels. What really added to it all was the instruction manuals. Back in those days game manuals were usually more than just instructions booklets. Often they were the source for a lot of the games fiction. The backstory and characters would get covered with some cool art usually. It was somewhere during this time that I came up the perfect Double Dragon game. Double Dragon 4: Underground Nightmare! Being 12 and not having much of an understanding how the video game world worked, my solution to creating this game was to write and draw the story and characters for the instruction book. Then send it in to the game companies and they'd just throw it together. To be fair I was 12 and admittedly a pretty weird kid. Not at all like the well adjusted adult I grew to be.

That story? Those characters? After the events of Part 3, Jimmy turned evil again (he was the villain of the original after all) and kicked Billy out of the Double Dragon dojo. Now homeless, Billy lives underground in the sewers (like the TMNT). It's there that he finds his long lost other brother Timmy! Timmy also is  martial arts master and reveals Jimmy has been evil THE ENTIRE TIME and was behind the events of part 2 and 3 THE ENTIRE TIME! Jimmy also wasn't really their brother, but an evil robot from the future (like T2). Now that Billy is living in the sewers and has found Timmy, Jimmy sends The Black Shadow gang to get rid of them once and for all. But now, they're all mutants!

To be honest, I kinda still want to see it made.