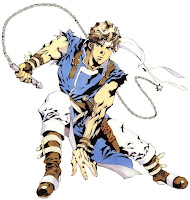 Castlevania is one of my favorite video game series. I love the mixture of fantasy and horror in addition to the platforming and action. Between the straight forward game play of the originals and the exploration of later ones, each game is usually a good time. One game though that doesn't get a lot of credit is Castlevania: Dracula X. Before you correct me, I'm not talking about the PC Engine classic Rondo of Blood. I'm talking about the Super Nintendo game.

While essentially being the same story, it's basically an alternative version of the game. Slightly different levels, difficulty, and other game play mechanics make for a new experience instead of simply being a port of the prior game. It both a substitute for Rondo of Blood to set you up for Symphony of the Night or a sequel to Super Castlevania (an alternate version of the original game).

Basically the SNES games make for a fun little side pocket continuity that either does or does not connect with the overall series. For what it's worth, the Japanese version of Dracula X is called Dracula XX in Japan to differentiate it. Other differences between versions is the amount of gore (and there is a lot of it) is toned down for the American and European versions. It was a different time back then before games had a ratings system. Companies often tailor their products to meet regional norms. Nintendo in Japan was more open to things such as blood and religion, while in America... not so much at the time.

Rondo of Blood is often seen as a benchmark in Castlevania games, while the SNES Dracula X is generally panned as an inferior product. Something I've never understood. Personally I've always liked the SNES game. It's a good game despite being different from the PC Engine version. Just different. There's never been a clear reason as to why the versions are different, but to me it kind of fits. Rondo of Blood is the epitome of a PC Engine game. While Dracula X is 100% full of that Super Nintendo flavor.

Recently when I bought Castlevania Advance Collection I was super pleased to discover it had the SNES game on it. That was a surprise considering the love the PC Engine gets. Getting reacquainted with it pretty much inspired me to write this post and show you all this cool game guide from Japan. Even if you can't read Japanese, it's still neat to flip through. That's actually something I plan to do periodically here when I talk about old video games is include some of the cool guides and magazines made for them. I've always loved them and willing to bet you'd appreciate them as well. The embedded reader can be adjusted to make it easier for you to flip through the pages or you can read it here.