This past weekend I lucked up upon the newest Scorponok figure at my local Walmart. I've always liked the Beast Wars Scorponok and getting this newest version of him was something I wanted to do. His original toy is pretty fragile and I keep mine in storage wrapped up in bubble wrap to hopefully preserve the toy. Though time wrecks havoc on older translucent plastic and the figure is mostly composed of it. Definitely having a newer figure if most welcome. Of course I have countless copies of the McDonald's toy as well but you know what I mean. Not to mention, that's a figure of Creepy with the wrong name, I'm convinced.

Scorponok looks like he walked off the TV from an episode of Beast Wars, the CGI wasn't that bad give it up. It's a really solid representation of him, but admittedly a little squat. That doesn't bother me though, there's bound the be a little leeway to make that design work in a real world object. The show model wasn't super toy accurate mind you. The transformation wasn't my favorite though. Not necessarily horrible, just a little less than stellar when it comes to his hips and chest. Basically the legs both fold up into his tail and the hips fit up with his robot mode into his chest. It's not hard, just a little fiddly. It was for me anyway, I also had a little trouble getting his beast mode head in and out of position. I pinched the shit out of my finger, so it was probably me being fat fingered.

Scorponok comes with his missile pods and infamous Cyberbee. They store neatly in his claws, so you don't really have to take them out. In all honestly, the implementation of these wasn't something super amazing to pull off. I was so happy to see them that you'd think it was. Love that damn cyberbee. I can see a Quickstrike being made from the engineering and hope that happens. That's another toy I'm a little nervous about. I'd gladly welcome Sandstorm or Double Punch... but would want a Double Punch more. I can't help but to want a Scorp made from the toy, you guys know I love my Gobots. Scorponok is a good toy and a great update of a classic character. I was initially stoked to see that he was getting a new figure and had a great time playing with him in my living room. Like a grown ass man would. 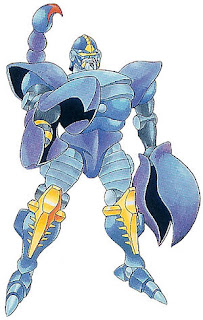