What A Spooky Poser 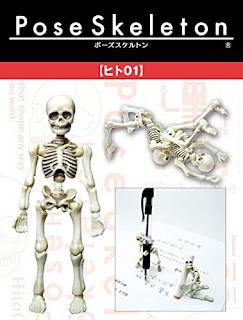 This past Sunday morning I found myself in another Walmart than the one I shopped at Saturday. Of course I took the time to look at the Halloween section with the wife. Different Walmart's tend to have different stock and that's usually noticeable in the holiday sections. There's probably a reason for it, but I don't give it too much thought. I just don't care. I like the variety between locations. Each store is it's own thing despite being part of a big chain. Like I said, we were checking out the Halloween section and for the record, this location usually has great holiday areas.

Each weekend they're getting a bunch of new stuff. It's fun to check it out and maybe get a cool surprise while doing so. Which brings us here today. Whilst looking around, I found a lone peg hook with articulated skeleton action figures for $3.88. It was just there, seemingly hung randomly with no actual spot to call it's own. I like to think it's supposed to go on one of those hanging strips and whoever just stuck it there. But there it was, cool as crap. So I bought one.

A Instagram friend pointed out it's a bootleg ReMent Skeleton that's been making the rounds. If you check the link, you'll see that's a $70 dollar toy. Holly crap, wow. You can imagine my surprise and apparently others as well after I pointed it out to others online. One guy pointed out that it's been in Big Lot's for a few years. I've never seen it, so maybe. On it's own, it's a pretty good figure. Lot's and lot's of articulation allows you to put it in a ton of poses. It is a bootleg, so the plastic quality isn't super awesome, but it'll do. It's not fragile or anything, so go ahead and put it in the Ironman pose.