Score One For This Deluxe Cat 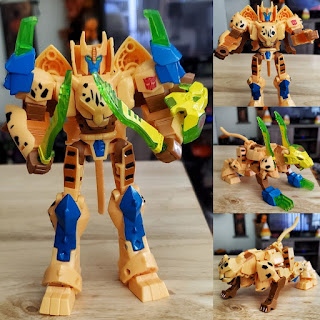 Sunday I picked up the new Cyberverse Deluxe Cheetor figure. I also got a Cherry Vanilla Coke and a Bueno bar, but I didn't want to show off. Let's just focus on the cat. Speaking of, what a good kitty he turned out to be. Normally I prefer to focus on the other classes with Cyberverse. Warrior, Turbo Changers, you know the variety. It's not that I don't like the deluxe class, I do. I also buy plenty of it in Generations and enjoy the variety. Not to mention, like I've said before, I enjoy the old school nature of these simpler toys. With the design aesthetic of the more kid friendly lines, they really take me back to older robot toys. It's something I enjoy a lot. Am I crazy? Probably.

Cheetor really works for me here. Cyberverse gave him a more angular design, similar to G1 Predacons. While I love my Beast Wars, I admittedly have always dug that angular animal look and it looks fabulous here. As you could expect from a Cyberverse toy, it's a faithful character representation in the visual style of the series. Cheetor looks like you'd expect him to and turns into what you expect. They did give him some new gear. Dual energy swords similar to the scimitars he carried in Beast Machines and cool snap on armor for beast mode. Combined with the swords, the armor makes for a cool new look on an old design. The claws and helmet can be mounted on his robot mode as well. It's a nice little extra touch.

Cheetor looks pretty great, and is well articulated. In all he's a pretty good figure. If I had any complaints, it would be his beast mode chest didn't hold together super tight. Or at least it didn't on mine. Another point of concern is newer Transformers toys are moving away from cellophane on the boxes. I don't mind that too much, however you really have to check your figure ahead of time to assure it isn't missing anything. I'd advise looking over the toy and in the box to be sure that you're getting everything that's supposed to be there.

Fortunately the little tie downs they use in packaging hold things in pretty well, but I saw one missing a cheetah head on the shelf. With shitty people in general you can never be too careful. Take an extra second to look over your purchase. Come to think about it, with Christmas around the corner... your loved ones may not know about this. Either let them know or be prepared to do some exchanges in the future. You never know if somebody trashed a toy on the shelf or stole a part. Some people suck.

I really liked this figure. It was fun to play around with in my living room while watching paranormal TV. Cheetor is one of my favorite characters in Transformers and I try to get as many of his toys that I can. Despite my issues getting his beast mode to hold together perfectly, it was still a pretty good cheetah. It's not exact, but it's similar enough to his toys that have came before. I transformed him mostly by muscle memory from those figures and that's not something I mind. The battle armor is a welcome addition and I thought it made him a little more badass. I would easily welcome several repaints of this mold. Score one more for this cool cat.