What Did You Do Ray? 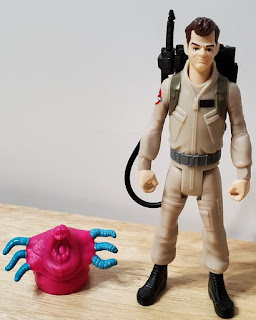 Ever since first learning of the new Ghostbusters Fright Features figures, I've been wanting them. A spiritual sequel of sorts to the Real Ghostbusters figures is an easy sell. Of course the pandemic pushed things back several times and they're just now hitting store shelves. They've actually been out for a few weeks, but I've just finally found them for myself. Stopping by Target for a new Galaxy watch, I swung by the toys and there was just one Ray Stantz and a million Ecto-1s.

I skipped on the Ecto-1 for the moment (don't worry, I'll be picking it up soon) and snatched up Ray before heading to the electronics department. The first wave of these is the classic team, you know who. They all seemingly share the same body type mold with different heads for each character. Considering the 10$ price, there had to be a little wiggle somewhere. They're all wearing the same outfit, it's not a big deal. The Afterlife kids have two different body type molds for the younger and older kid Ghostbusters.

I've been comparing these to Kenner's The Real Ghostbusters and you can probably see it in the picture. Same articulation and comes with a ghost to bust. These are just a little taller than the classic Kenner figures and the sculpting is different. Though I'm sure you could still pair them up together well enough. It's clearly what Hasbro was going for with this being the 'core' toy line and the Plasma series being the higher priced and more detailed toys. It really works for me, these guys are pretty fun.

The proton packs are made of a softer, almost rubbery material. It plugs into the Ghostbusters back snugly and in all is one piece. The cord is flexible enough to put the Particle Thrower into either hand or stored on the pack via a peg. It's pretty simple, and simple is often the best solution. The original Fright Features figures had the Ghostbusters collectively loosing their shit.

However in the new Fright Features, the included ghost (for bustin') will change into a more frightening version of itself. Ray comes with this pink weirdo who splits open to show his gross mouth and freaky multiple eyes. The larger Ghost figures have various gimmicks similar to the Kenner larger ghosts. It's pretty great and so are these. I was a fast fan before they were released, and a steady one now that I can actually buy them. Ray was at my side all weekend getting played with constantly, I can't wait to get the rest. 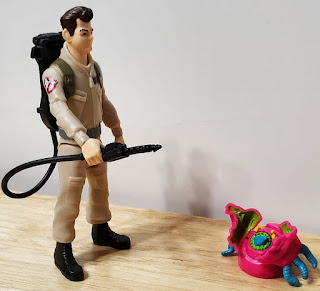