Masters Of Their Own Dang Universe

He-Man and the Masters of the Universe is a new cartoon and toy line aimed more at kids unlike Origins and Revelations. That gives it the freedom to be different. I've generally always been pretty G1 with He-Man, but this one has my interest. Taking a more sci fi route, they're practically reinventing the series for a new generation of kids who practically don't know the gang.Going by the trailer, I'm assuming the new versions of the crew are a group of kids or younger people. They'll find themselves discovering Castle Greyskull and all the various magical stuff that makes up Eternia. It's a little weird seeing Man at Arms the same age as Prince Adam... but the whole thing has a general Megaman/Big Hero 6 vibe that's hard to not like. For me anyway.

The toys so far seem to match the show models pretty well. They're the standard 5" you expect from a He-Man style figure with some beefy, more animated styled sculpting. There's also some fancier 8" figures that look pretty neat. Not to mention vehicles and playsets. The visual styling is a pretty big departure from what you'd expect, though I'm making 'The New Adventures of He-Man' comparisons thanks to the more sci fi look. I plan on getting a few, but would go hole hog on Eternia Minis of them if they happened. You know, I'd love a game. A 3D platformer on my Switch.

So far the reception to the trailer and early toy looks has been pretty positive in the MOTU groups I'm in. Which was surprising, I'd figure the opposite. But no, most seem to be pretty welcoming towards it. The only negativity I've really seen is the generic nerds who generally overvalue their own opinion. I think with the healthy amount of new and old themed MOTU product available, most folks are ok with something different. They literally can just ignore it if they choose. Me though, I'm digging it. It's a pretty fun departure from a well established formula. I'm ok trying something new out. If it's not for me, then no biggie. 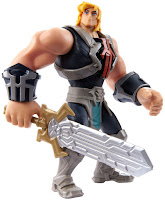