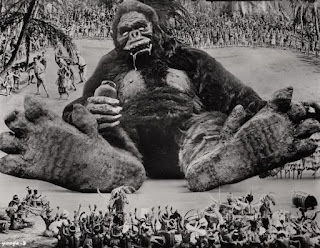 It's probably no suprise to any of you that I enjoy watching paranormal TV shows. I think I've talked about that before here. Saturday night I fell asleep in the living room with paranormal shows on in the background. This happens quite often, I'll wake up shortly after and find my way to the bedroom. Well Saturday night, the Mrs. and I were watching TV and she feel asleep on the couch and I soon did the same in my chair. We're here today to talk about the dream I had... it's a weird one. I may need help.

In my dream I had become very interested in a lost King Kong film production. The movie had begun filming, but never finished and had become lost media over time. All that was available was a picture of the King Kong costume in a warehouse door. I couldn't shake the idea that the warehouse looked super familiar. Sure enough, it turned out to be nearby. So I printed out the picture and headed there.

The picture matched up perfectly with the warehouse. So while I was taking pictures for a post a old man walked up and asked what I was doing. After talking for a bit, it turns out he knew a lot about the production. He actually was working in the area at the time. The production was moved shortly after there was a murder in the back alley.

Details were scarce, but a guy was chased down the alley and shot to death. Ever since, every night you could hear the gun shots in that alley. Needless to say I came back that night to see if I could hear them. As I walked down the alley, gunshots rang out. It was scary, holy crap. I had info on this lost King Kong movie with a ghost story to boot! Then... then... I heard the hosts of The Dead Files talking as I awoke really needing to pee. Dammit.