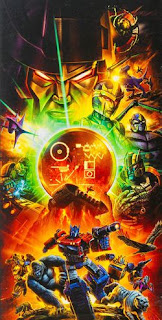 The third part of the Netflix War for Cybertron trilogy: Kingdom debuted over the last weekend. As much of a Beast Wars fan as I am, I was pretty hesitant as the show so far has been pretty hit or miss. I enjoyed Siege for the most part, even though it wasn't great. Earthrise... was pretty disappointing. I went in expecting a repeat of Siege and still don't know what I watched. Even online synopsis's doesn't fill me in anymore than what I gathered from watching it.

So going into Kingdom, I was tempered. I love my Beast Wars but knew this wasn't going to be the same. Pleasantly, it's been the best out of the three mini series. I'm nowhere near saying it's perfect, but I've enjoyed it for the most part. Seeing the classic cast teamed up with the BW gang is exhilarating, even if each is different from their original show counterparts.

I haven't been fond of some of the voice work in the overall trilogy as is, but some of the new voices I outright don't like. I liked Dinobot's arc a lot, that was a pretty good new way to tell an old story. It felt fitting. The show wraps up the trilogy. I wish I could sat neatly, but it's far from perfect. Still, it's the better of the three installments and a fun watch.