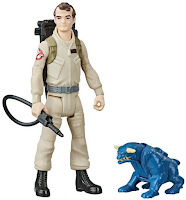 After a year of covid-19 based delays, Ghostbusters Afterlife is finally getting released this November. With it is a slew (that's right, a damn slew) of various tie in merchandise. You already know the Fright Features line is the most interesting to me. A spiritual follow up to Kenner's classic Ghostbusters toy line is just the perfect thing. Sure, there's things like Plasma series and other neat stuff. Just nothing feels as right as these, THIS is what goes through my mind when I think Ghostbusters action figures. The kids from Afterlife will be featured in wave 2 with some familiar looking ghosts. I hope this goes on past wave 2. I'd love wacky variations like the original Kenner line, or even the girls from the 2016 movie. While we're at it there's Janine and Louis. There's no limit to where they could go with these. Or at least no limit I want them to hit.