I Have The Revelations 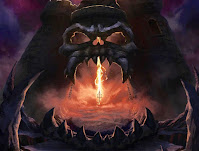 A plus of being home sick was watching Masters of the Universe Revelations right away. The long awaited show debuted today on Netflix and was a fun watch. Serving as a sequel to the original Filmation series (and ignoring all other series), the show takes place years after a pretty big event that changes everything. I'm not going into super detail and trying to avoid spoilers (the show is just a few hours old) the best I can. Let's just say, this isn't what you expected.

It's really hard to dislike this show as a He-Man fan. Though the bedwetting is generally being done by those who generally do that sort of thing. Combined with holier than thou types instantly disliking something, it's the same general generic complaints. For the most part I've seen mainly praise, so it's not just me liking something from a series I like. Not as goofy as the original series and that's fine, you can't expect it to be the same thing. It's not supposed to be. What I got was a fairly true to form series written for an adult audience without the same generic 'edgy' trappings such things normally get.

The jump forward in time gives us a look at Eternia very different than we've seen and I liked it quite a bit. I loved Tri-Klops and his crew. I didn't see that coming. Once again, I'm trying to not give away anything. However it was a really fun way of giving the usually ignored character a purpose. Roboto was ssssoooo good. The season is a short five episodes and I'm really looking forward to more. That and some resolutions for that cliffhanger. Man, what a great show.