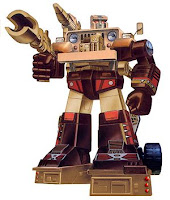 After a sharp descent, Jetmaster toppled weakly to the earth of the landfill. Struck by a volley of fire during transit, Grimmaster had fallen from the same altitude seemingly unscathed, but was at a total loss as to what to make of the situation.
Before his eyes appeared a dusty brown Transformer who could be none other than their attacker.

“You can call me Roadmaster. Just a humble mercenary by trade. Thing is, it just so happens I’ve been hired by your former employers.”
“You must be with Master Chaos… That means you’re the enemy!”
Already combined into Prime Mode, Grimmaster readied himself for combat..

“Whoa, take it easy, there! How about you come on back to the Decepticons? The High Regent’d give you more credits than you could ever want. Just think about it! Bein’ a good guy doesn’t pay the bills. What’s in it for you?”

“I’m not lookin’ to get paid! ‘Specially after you went and hurt my buddy! And guess what, I was never real big on thinkin’, anyway!
His offer refused, Roadmaster feigned regret.
“That’s a shame… Guess that means your career ends here and now!”
With these words, four drones burst from the surroundings as if being born from the wreckage.
“Let me show you what the funding and tech of the Decepticons can do… this is my army, the Road Drones! Unite!”

The two Prime Modes clashed, and Grimmaster used the sharp fangs of his right arm to dig into Roadmaster’s left, tearing savage chunks from it.
Although wincing with pain, Roadmaster was undaunted.
“Hah! This landfill is my playground! Don’t ever underestimate a Junkion!”
With a magnetic intensity, the scrap metal around Roadmaster was drawn towards his body, covering and instantly repairing his wounds.
In a clash between destruction and regeneration, which would emerge victorious…?