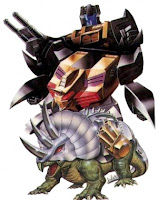 On a rocky mountain ledge, five dinosaur Transformers were raging wildly as if flaunting their raw power. Boulders were smashed into pebbles, sharp gusts of wind punctuated the strikes of a tail, and the earth shuddered with thunderous footsteps. In this place known as “Dinobot Island,” a new Master was making the final adjustments to his drones.

“I’ve got a message from Major Clouder of the Department of Defense!”
Having just touched down on the island, Jetmaster addressed the dinosaur Transformer before him with a cool glare.

“After suffering two attacks from the Decepticons, the Race Drones fortunately escaped unscathed, but our military drones were lost to the enemy… Choppermaster remains unaccounted for. Placing a high priority on this phase of the operation, senior command hereby orders Grimmaster and the Dinobot Drones to prepare for deployment. …That’s what the man said.”

A contrast to his fearsome appearance, Grimmaster’s somehow gentle eyes darted around nervously.
“Hey, not my decision, but they called you in. Just don’t try anything shady…”
Jetmaster barely avoided referring to the Transformer as an “ex-‘Con.”
“Y’know, I’m real sorry. But look, I’ll fight good and help you guys out!”
As Grimmaster looked at him earnestly, Jetmaster’s expression softened just slightly.
“Well, nobody’s trying to say you’re not tough enough. But, I’ve gotta know. Have you really been training alone here for going on 10 years?”

“Oh yeah! Gettin’ in with the Master Class, I wanted to get real strong so I could do somethin’ for ol’ Earth, and all my human pals here, too! Gotta respect the chief after he saved the life of a ‘Con like me, y’know? And hey, I’m not alone… I got my buddies with me!”

As Grimmaster spoke, four Dinobot Drones emerged to gather around him, each calling out to him familiarly as if affirming his will. “Buddies, eh? Arright, get ready for duty, Grimmaster!”