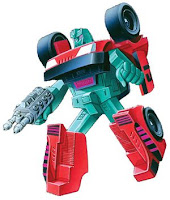 The young Autobot Racemaster was in the middle of transporting his assigned drones. Despite the incredible speed with which he had been imbued, he had little choice but to obey the speed limit of Earth to the letter of the law.

“Choppermaster, what could’ve happened to you? Did you get caught in a batalla that put you in stasis?” To an Autobot born with a mental acuity that outpaced his current movement speed many times over, this regulated drive seemed nothing more than a dull errand. As his processor speed alone continued to rise, the transport trailers that flanked him appeared to drift in slow motion.

“Wait… If the Decepticons did get their hands on the drones, that means I’m about to…!”
Suddenly, as if to confirm Racemaster’s suspicions, his sensors lit up and a hail of missiles rained down around him. “Your little drive ends here, boy. You may choose between surrendering the drones, or facing certain destruction at my hands!” As Combatmaster emerged from behind the girder of a bridge, Racemaster observed the four drones stationed atop buildings around the highway, each with their weapons pointed squarely towards him.

“Resist if you like… but I believe the drones you transport are still unequipped. Do you really intend to fight me barehanded?” Combatmaster inquired smugly.
Hearing Combatmaster’s challenge, a bold grin flashed onto Racemaster’s face.
“You must’ve put a lot of effort into positioning your ambush just right. I see you’ve got a lot of confidence in your tactics… But I’ve still got the ultimate weapon on my side!”

No sooner had Racemaster spoken these words than his drones burst out from their trailers, moving in unison with him as they tore off with blinding speed. Thought and decision in a split-second. The sheer speed of Racemaster’s calm mind was truly his greatest weapon. “Going at it head-on isn’t the only way to fight, hombre! This is what we Earthlings call a brave retreat!” Combatmaster made haste to combine with his drones, but the five targets nimbly dodged his all-out assault, soon disappearing from view.