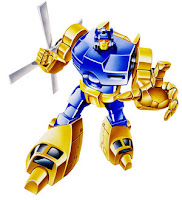 In the deep snow among the Swiss alps, an Autobot helicopter, Choppermaster, hovered as he issued commands to four drones, which in turn struck their practice targets with unerring accuracy.

“Controlling these drones is no problem. The merge test should be a cinch.”
The next moment, he was struck by a burst of cannon fire from the ground.
“How do you feel now, Autobot?”
As Choppermaster plunged to the ground and slumped down in robot mode, a Decepticon stood regally before him with enormous claws outstretched.
“You seem to have lost your vigor. Perhaps “Rollermaster” should seize those toys of yours… Unite!”

Responding to Rollermaster’s command, the four combat drones came together as his arms and legs. The Decepticon’s newly-formed Prime Mode wasted no time in bathing the training grounds in a sea of fire.

“Sorry to say, but that outfit doesn’t suit you!”
Choppermaster emerged from among the flames, his partner Firebug having converted into protective armor to shield him.

“I’ve heard that old folks can’t figure out the latest toys. I’ll show you how to play!”
Detaching from Choppermaster’s chest, a gatling gun emerged from Firebug as he slid into the Autobot’s hand. The next moment, Rollermaster was ablaze with flames.
“My body… it’s burning! What trickery is this, Autobot?!”
“You like the taste of incendiary gel? Guess nobody told you, I love playing with fire!”
The two continued their combat, unaware of the gaze focused upon them…