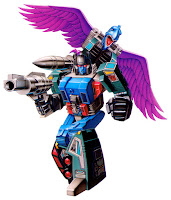 The location was a hillside surrounded by mountains. In a cliff face, a great cavern yawned open. Around it were deep holes in the ground that appeared to be part of some archaeological dig.
Before them, Combatmaster stood alone.

“I’ve been waiting for you, Autobots.”
Dodging Racemaster’s preemptive strike, Combatmaster targeted Jetmaster and fired the first shot, but Jetmaster’s form had been hidden away by his stealth capabilities. It was Choppermaster that appeared in his place, equipped with the Jet Drones.
“You’ve got something of mine there, and I’m takin’ it back!”

As a fierce battle escalated between Autobot and Decepticon, Clouder used his Assault Drones to scan the area.
“What were they trying to dig up? Is this really their base?”
The drones’ sensors detected several large fragments of metal that seemed to have been excavated from the ground, one of which was engraved with an unfamiliar insignia.
“What’s this mark…?”

As if in answer to Clouder’s question, the Decepticon Buildmaster emerged from the cave along with the stolen construction drones.
“Take your filthy Autobot hands off of that. That’s proof of a glorious Decepticon future. It’s not for your kind to defile!”
“So, you’re supposed to be the guard dog of the construction site? If you think your future is scrapmetal, I can send you there right now! Unite!”
“A miserable human stands no chance of opposing us!”

Armed with the dual powers of construction and destruction, Buildmaster retaliated in his own Prime Mode. Pitted against the fierce spinning power of his opponent’s shoulder-mounted drill, Clouder manipulated Assault Master with the link system, but his movements were beginning to fall behind…

“Clouder, you keep on movin’! I can handle this guy!”
Grimmaster let out a howl as he intercepted Buildmaster, and as the clash between construction vehicles and dinosaurs began, Clouder continued into the foreboding depths of the cave…