Transformers United EX #7: The Price Of A Life 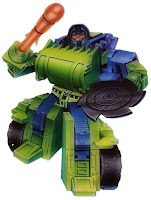 “Where am I…?”
Engaging his optics for the first time after falling into stasis in the mountains of Switzerland, Choppermaster was greeted with the familiar surroundings of the Autobot base. Through blurred vision, he could see Airmaster’s face.

“It’s a good thing my partner, Deduce, could use his probability assessment function to home in on that flammable gel you like so much.
Airmaster winked at his teammate, who had just been returned thanks to his rescue efforts.
“They got… their hands on the drones? Scrap!”
“Come on now, we can make new drones! Let’s just be happy you made it back with your spark intact.”

However, their reunion was suddenly cut short by a cacophonous tremor.
“You’re up, Groundbreak! Bust ‘er open!”
With the sound of this voice, a gaping fissure opened in the floor, from which emerged a Decepticon armed with a huge drill.
“How ‘bout that, doctor Dozermaster’s makin’ a house call! No thanks needed, just fork over those construction drones to Master Chaos!”

“Not a chance! But how did you manage to find…”
Airmaster wondered incredulously as he shielded Choppermaster, who had drifted back into unconsciousness during the impact.
“Little slow, ain’t ya! Your copter friend there is only alive ‘cause of Combatmaster’s plan. You didn’t just bring him back, you showed us right to your base!”
Unconcerned with being alone in an enemy base, Dozermaster grinned wildly.
“And it gets better! The tracking beacon on your cannon-fodder pal there has got a nice bomb inside. So, the detonator for the drones. Not a bad trade-off, right?”

Thanking the maker that his teammate couldn’t hear him, Airmaster wasted not a second in giving his decision.
“I’ve had enough of these struggles for power… My sole duty is to save the lives of my friends!”