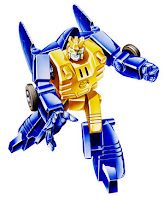 It is the 21st century. The never-ending war of the Transformers had once again shifted its stage to outer space, and it seemed as if a moment of peace had returned to the Earth. Yet even then, the Autobots were preparing themselves for the possible threat of a Decepticon attack, working together with the scientists of Earth to develop new armaments.

The system known as “Power Core Combination” was a new method designed to allow one Autobot to combine with four drones possessing a range of abilities, forming artificial limbs around the “core” of the Autobot’s body. The prototype Energon Matrix installed within them would regulate and unify this power, effectively creating a new warrior. The first candidate for the process was an Autobot born on Zone. A covert operations specialist who had become recognized for his stealth capabilities, upon successfully combining with the drones and achieving Prime Mode, he was given the codename “Jetmaster.”

It was the first day of field testing. Combined into Prime Mode, the sight of Jetmaster effortlessly defeating the training Novabots evoked recollections of Optimus Prime’s might in battle with the Decepticons.

“Not bad! This power puts me right up there with Optimus! I was right when I figured you Earthlings knew what you were doing.”

Jetmaster’s cheerful banter seemed forced as he tried to mask his actual amazement.
“Enough sneaking around, already. Any ‘Cons show up, I’ll take the lot of ‘em down myself!”
The development team marveled at the success of the project…

“The results of the experiment are just as we’d hoped. But knowing the Decepticons, I’m concerned that this power may be too great for them to overlook.”
As Professor Chase spoke, he considered the grave situation that could result from a single error in the use of this immense power, and felt a moment of uncertainty pass over him.