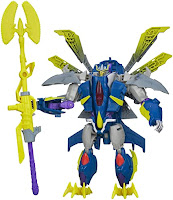 Tales of the Beast Hunters - Chapter 14

Dreadwing has known Starscream for too long for the cowardly Seeker to hide from him. Still, when he smashes into his former commander's hiding place, he expects a vicious fight, and is surprised to instead find Starscream with his weapons lowered. "Listen!" Starscream says. "Since when do I flee the moment Megatron is out of the picture? If he was deactivated because of me, I'd take command! As is my destiny!" Dreadwing aches to blast his fellow air warrior to atoms, but he knows Starscream is telling the truth. He levels a finger at the other Decepticon. "You will help me find Megatron then. Find him and bring him back."