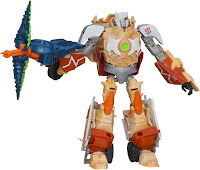 Tales of the Beast Hunters - Chapter 13

Autobot Ratchet scowls at the data discs recovered from the Decepticon lab by Smokescreen. Most of them are useless - charred or cracked by the same plasma blasts that had rendered the Autobot warrior himself nearly unable to return to base. But a few have shocking information on them. Information that not only reveals much about the cloning process used to bring the Predacons back to life, but also about the secrets of the powerful new weapons recovered by Bumblebee.