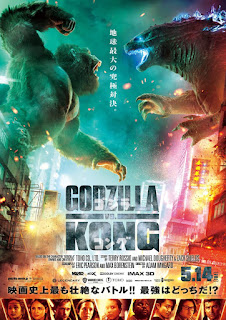 After waiting an eternity, Godzilla vs Kong was finally released last Wednesday. Thanks to covid-19 adding a few more delays, the movie was released to theaters and streaming via HBO Max. That's how I watched it, at home with some takeout from a steakhouse Saturday night. I'd love to have watched it on release day, but as I've said before here- my work schedule makes watching movies hard during the week. Not to mention I had just got my internet back after a EF-4 tornado went through my town last week. After all the delays, a few more days didn't seem that bad.

I loved this movie. Which you probably guessed already. I've been very happy with the Monsterverse's use of Kong and Godzilla and the world they gave them to play in. Ultimately this movie was the planned culmination of the series. So depending on how the pendulum swings it could be the last movie or the start of a new phase. Considering how successful it's been so far, hopefully they'll let them fight for a few more movies.

Speaking of success, the movie is pulling the kind of box office you'd expect in a big budget Hollywood blockbuster before covid-19 changed everything. That's pretty amazing. While the toys have been selling steadily at my local Walmarts, they were completely cleared out Saturday morning. Considering the extra stock they put out a few days more and that's awesome. Finding a Mechagodzilla might prove to be a challenge. If that's due to a successful movie making people want monsters toys, then I'm happy to share in the selection.
Godzilla godzilla vs kong kaiju King Kong Kong Legendary Legendary Pictures mecha godzilla Mechagodzilla monsters Monsterverse Toho Toku Tokusatsu warner brothers Zone Base