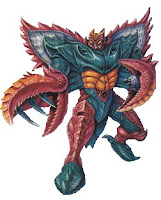 Capable of remaining motionless beneath a layer of sand, Razorclaw is one of the best quick attack specialists they've got! When enemies approach his hidden location, his powerful pincer claw shoots up through the surface to capture and impale victims with the claw's protruding cyber-spikes! Radar defeating shell armor allows him to stay cloaked from Maximal sensors. Blaster rifle in secondary in claw fires disrupter particles, temporarily paralyzing his unsuspecting prey.