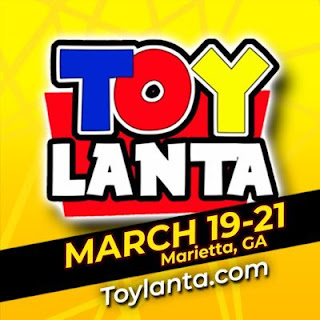 After last years covid-19 induced cancellation, ToyLanta returns for 2021 in a new location! I'm really looking forward to the great toy show and have been preparing myself for it for awhile now. I've got my backpack ready with an ample supply of sanitizer and face masks. This year will be a different kind of con for me. Instead of staying all weekend like normally, I'll be going for just a few hours each day. Not that I don't want to do the whole weekend. Even with the covid numbers dropping as much as they have, we're not out of the woods yet. I'm just trying to be as safe as I can. Hopefully next year I'll be able to do the whole weekend, I'm just thankful to have this experience this year even as limited as it'll be for my own safety.

If you're coming to the show, the annual Transformers panel hosted by Dusty and myself is on Sunday at 2PM. Normally we do this on Saturday, but I don't make the schedule. If any of you are there, feel free to say hi! I'll be periodically updating my Instagram from the con over the weekend. Keep checking for new pictures from the show. Or hey, maybe give me a follow so it'll be on your feed. I tend to post multiple pictures in a post, so be prepared to swipe through a lot.

FRIDAY: After an interesting backroads ride to the new location that included crossing the local haunted bridge, I arrived at the con around 7pm.  While getting my badge Buddy walked up to say hi. He then took myself and another dude (sorry I forgot your name dude) down to the Goo-Con showcase room. The room will be having all sorts of demonstrations on customizing and other toy related creations. I really liked the custom molded figure heads that go with a dying resin demonstration. It was neat.

Buddy went to find some food and I explored a little. One thing I learned fast was to switch from a cloth mask to a paper mask. I get hot fast and thought I was going to pass out for a second. Toylanta's new home features a much larger con space. So I didn't have time to check out the entirety of the dealers room preview before it closed for the Lobby Swap Party. I did price a few Rocklords though as that's my focal point this year. I've been kicking myself for not picking them up at the last show and don't plan on making that mistake again. Tomorrow I'm bringing plenty cash and buying some rock robits dammit. There was a surprising amount of M.A.S.K and Dino Riders. Good prices too.

One dealer did have some hand knitted Star Wars characters and I grabbed the last Grogu for the Mrs. The Lobby Swap Party was as usual a hodgepodge of folks with random stuff for sale/trade. I was very surprised to see a good amount of Starcom stuff. I ran into a guy with a boxed Mighty Max Skull Mountain. We chatted for awhile and admired the art on said box. Good times.

Another guy had a decent amount of Transformers and Super Sentai. I was interested in a Cohrada vs Saberback set. He wanted 30 for it, not bad, but passed. I already have them. *shrug* With Kingdom making beast modes cool again, I hope someone younger gets to have the same fun I did all those years ago with them. That's the best kind of joy, a mixture of discovery and amazement.

There was a good number of Shogun Warriors around, leading to a lot of accidental fist misfires. Just awesome anarchy of the most random kind. I ran into Jimmy and his wife. Talked with them a bit before heading home. For some reason the drive took FOREVER, but thankfully the Mrs had pizza and buffalo wings waiting. I was starving.

SATURDAY: The Mrs came with me today to the show. We got there just before 1pm and man there was a lot more people there today than Friday. After looking around I soon discovered most of the Rock Lords I had priced were already gone.

One guy did have 2 Granites though, so at least I got one Rock Lord this time. If I see anymore tomorrow they're coming home with me. Dammit. I was seeing a good bit of Gobots in questionable shape. Sunday's bringing of 'everything must go' may have them priced well enough to buy. There was a fairly priced Diaclone Multiforce that just may find itself my property as well. Almost bought a Creepy for $20 before I noticed the one missing claw. There was a random Deathsaurus missing partners and weapons on a booth that I was happy to see there.

There was a Lego guy with tons of custom mini figures in one dealers room. Got the Mrs some Mandolorian and some great Master of the Universe figures. He had a movie He-Man left that I may end up getting as well.  It had an extra big sword as it should.

The Kaiju Attack table had a good selection as usual and I got some vintage sofubi Ultraman monsters. Probably getting more tomorrow. Ended up in some conversation with him as well. That guy has been at the show the past few years and I'm glad to see him each time. There was a good bit of tokusatsu toys around the tables this year. Not just stuff that's popular in America either.

I almost bought a Cassetteman before realizing it was a bootleg and the dealer was non-the wiser. Shame, but I felt it best not to inform the guy. Didn't want to risk the potential argument. One guy tried to sell me some rather poor shape Battle Beasts for $20 each. I guess he liked extra nope on his hell no burger. I visited the creators room and watched Buddy give a lesson on air brushing. Considering he's been a successful artist for a really long time, that's something special. Hopefully those hoping to learn took notes.

We left close to 5 and headed home. The drive home was much better than last night even with a stop at Circle K. Taco Mac was Doordashed soon after getting home.  It was really good. I've never had a taco from there.


SUNDAY: I got to the con around 12PM for the last day of the show. My panel was at 2, so I had a little time to look around. Ran into Marten and chatted with him for a few minutes before heading into the con area. After a quick stop in the restroom to put some eye drops in (allergy season) I ventured into the dealers room and laid eyes on a glass box I didn't see before.

Inside it was various robot figures and a very familiar blue and gray bot. The robots tag said 'unknown Japanese Transformer $5'. I realized it was a Convertors SDF-1 and bought it. A tour around the room led me to the booth that had the Granite I bought Saturday.

It was Sunday, so folks were making deals. I eyed the robots and just couldn't pull the trigger on any. They had a Scorp in great shape for $20. I decided to think on it and soon found myself at a booth looking at bagged figures pinned to a corkboard. I picked out a Loco for pretty cheap in seemingly great condition and then noticed a Scorp in another bag also looking pretty good for $8. I took them over to the dealer and they cut me a deal without even asking. $15 total mofo.

I headed downstairs as it was closer to 2PM at this point and that's where the panel room was. Looking around the downstairs dealers rooms landed me back at the Lego table where I found another Grogu mini figure for the Mrs. She stayed home today and I wanted to get her something.

The same guy also was selling emulation portable systems and I got a Gameboy looking device prelaoded with a lot of NES games. Mixed in with the selection was a bunch of unlicensed games. Hello bootleg Mario games! I then ventured over to the retro gaming room and played some Collecovision before chatting it up with the guy who ran the room.  A quick run to the restroom and I went to the panel room to get ready.

I figured the panel would be a ghost town since it was on Sunday and with the pandemic attendance was weird this year. Good number of people, not many as usual, and not as many guests either. Totally understandable. Generally my panel is on Saturday when the bulk of the folks are there, Sunday is a short day with most people heading out.

I was surprised to see a small group of people come in, including some teens who happily had just bought some Cybertron toys. We had a great conversation and the time just flew by.  Before I knew it the panel was over and I decided to take one more walk around before heading home.

Everything was closing and I took a minute to watch the dealers pack up. It's a nice way to mentally end the convention I guess.  Headed home to a home cooked pot roast dinner. It had been a chilly weekend, so that was the perfect meal.
at March 19, 2021
Email ThisBlogThis!Share to TwitterShare to FacebookShare to Pinterest
Labels: battle beasts, conventions, GIJOE, Gobots, indie toys, Joelanta, keshi, Masters of The Universe, Microman, Micronauts, mini figures, Power Rangers, Sofubi, Star Wars, Toylanta, Transformers, Voltron, Zone Base