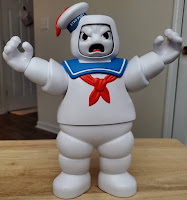 A couple of weeks ago I picked up this new Stay Puft Marshmallow man figure by Hasbro. He's part of PlaySkool Heroes, so I assume (hope) more Ghostbusters toys in this range are on the way. However he's also the right size to fight your other Ghostbusters figures, so don't let the specific line hold you back. It's impossible not to love it. He's the physical manifestation of an eldritch abomination hell bent on destroying the world... and super adorable. Just look at those cheeks!

Stay Puft doesn't have a ton of articulation. You can move his arms and twist wrists. For some reason his top half can rock sideways at the hips. It doesn't serve a purpose, but it is fun to bop back and forth. It's like they intended a child to play with it or something. The main feature is a face changing gimmick. With a push of the button atop a marshmallow man's head, the face of the destructor changes from happy to angry.

Doing this is literally hypnotic. His mood swings are far more entertaining than they have any right to be. One minute he's sweet and asking for you to donate to his patreon. The next he's pissed off that you wouldn't and told him to get a job. You've got some nerve. This is a great figure and fun to play around with. He matches pretty well with whatever set of Ghostbusters figures you pair him with. Seeing as Afterlife was recently moved to a November release from a Summer release, I expect (hope) the toys to start hitting stores sometime soon.

Stay Puft has a figure in the upcoming Fright Features line (a spiritual follow up to The Real Ghostbusters toys) but I can see this toy being intended to pair with those as well. It's generally with the other GB action figures and not the Playskool toys on store shelves. Even if he's an odd marshmallow man out among the other toys, it's a fun toy to play around with. Who thought mood changes could be so fun? 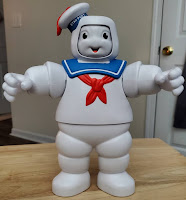