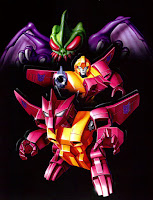 "Strike fear into your enemy, and you've won half the battle."

A flying fury of flashing fangs and tearing talons. He's a one-robot wrecking crew who has been known to reduce high-rise office towers into rubble within seconds, just for laughs! Also gets his kicks snapping wings off commercial airline jets. His enclosed creature/robot is armed with a high-powered, laser-sighted, photon rifle for intense air-to-surface assaults!