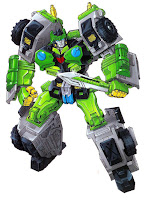 "I'll go anywhere in the universe, so long as it means scrapping Decepticons!"

Springer spent much of the war with the Decepticons going it alone, making friends along the way, but never staying in one place for any extended period of time. As word of the defeat of the Decepticons on Klo made its way throughout the galaxy, Springer was a bit disappointed when he thought that there would no longer be a war to fight. When he was approached by Grimlock to join the crew he was leading to hunt down Bludgeon and his army, Springer jumped at the opportunity. Serving as Grimlock's Security Chief, Springer is one Autobot that the Decepticons usually think twice about crossing.