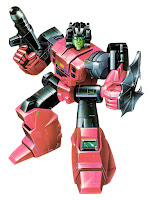 A fearsome, foul-mouthed nightstalker. Rebels against authority in any form. Lashes out at anyone who even suggests his next course of action. His Decepticon superiors have more difficulty controlling him than the Autobots have fighting him. Binary-bonded to Brisko, a former Nebulan cartographer with a photographic memory. Shoots semi-automatic ion pulse gun. Tail converts to compressed air cannon that produces 200 mph gale force winds. Able to fly short distances in wolf Mode.