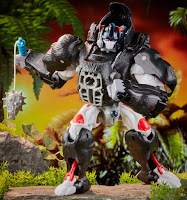 Hasbro is doing a line of reissue Beast Wars toys in vintage packaging exclusive to Walmart. This is in line with the G1 and Headmasters series they have been running and making for an amazing Great Value BotCon 2021!  Like the G1 toys, these have very slightly different paint apps from the originals. This still doesn't bother me as they're reissues and I'm not trying to pass them off as originals (shooting birds at Ebay). This is a super fun thing for me and something I can't resist.

Don't let anyone ruin your Great Value BotCon and enjoy your Transformers the way you want. Between all the various 90's stuff making a comeback, I'm in heaven. Before I had said there was a real thrill in buying G1 Transformers at Walmart again and I'll say it again. This is an awesome feeling. You can't go back in time like the Maximals did, but it's fun to pretend a little. Before I watch Sting wrestle on TNT, I'm gonna run to Walmart and grab some Doritos 3D's and grab a Cheetor. What year is it again?