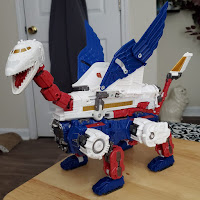 Sky Lynx from Earthrise was another Christmas gift from the Mrs. He's always been one of the more neat members of the Autobots. You've got a space shuttle that transforms into some kind of dinosaur bird thing, while the booster pack/transporter thing turns into a lynx. The two robots then combine to form Sky Lynx, whom best can be described as something. But a specifically majestic something. He's makes no sense whatsoever and that specifically makes him perfect. Majestically.

This new figure is an extremely solid update. Bringing the original toy to the modern era with all sorts of fancy articulation and improving on the original toys flaws. It's pretty great and he'd tell you the same.

This is a pretty big toy with a bunch of different modes. Despite all of that he transforms really easily. It's a snap to convert everything into everything and combine those everythings into an new everything. He's a lot of things, but not a complex thing. That's a nice thing.

I'm particularly happy that the designers kept him as faithful to the original design as possible while updating him at the same time. Sky Lynx is such an individual, he needs to be stuck in his era. I can't imagine a sleeker version would look any better. Something this weird needs that big chunky 80's super robot aesthetic. 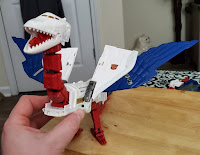 They gave Sky Link a big articulated neck and tail. He's always had a big neck and tail, but the articulation allows for a nice range of movement. My mental go to imagery for Sky Lynx is the episode 'Call of the Primitives'. He's portrayed more like a brontosaurus in that episode and this neck and tail make that more possible than his original toy. By that, I mean, he can actually be bent that way.

Before anyone tells me a brontosaurs doesn't actually exist, neither does giant alien robots that turn into fifty thousand different things. But they should have feathers. Not dinosaurs, Transformers. 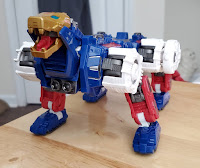 In case all his different modes weren't enough, Sky Lynx has a base mode as well. Obviously it's meant for Micromasters to function as a base for. However I find it just makes a good launching pad for the space shuttle. Though I guess that would mean the Lynx portion would be left behind. That never stopped Omega Supreme though. It's uh... not a very realistic cartoon.

I do like the base mode a lot, even though mine didn't hold together very well. Admittedly I may not have stuck it all together right. There's a nice ramp that runs up to the shuttles canopy. Said canopy can open, even though it cannot actually hold anything. It's the thought that counts. 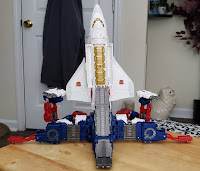 It's super hard not to like this toy. Big, chunky, and downright insane. He even comes with some of those plug in action effect thingies. They're all fire blasts. One big segmented one and three smaller ones. You can use them for the space shuttles thrust or Sky Lynx's fire breath. Their may be some other uses for them that I didn't notice.

Like I said directly above, it's hard not to like this toy. It's literally all toy and you can just sit and play around with him forever. There's a real visceral joy to a large dinosaur/space ship thing. Just want to fly him around the house for hours. Watch out for the cat. 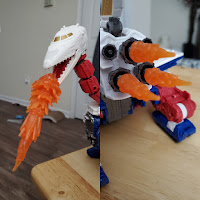