Rats Off To You 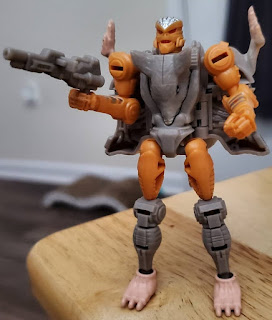 After spending much of Saturday attending to Ia-Con Online, I had to make a run to Walmart for a few things as well as pick up some take out. Of course I checked the toy section as was happy to see new Kingdom figures in stock. Nothing said I've been at a Transformers convention (virtual or in person) all day better than bringing home a bunch of Beast Wars figures.

The first I grabbed from the pegs was Rattrap. Rattrap is in the new small figure Core Class and is a pretty good update of his original design. Robot mode is pretty accurate to the cartoon, while the beast mode is much more life like. The original Rattrap toy was a basic and seemingly pretty close in size to this new toy.

Unlike the original toy, this new Rattrap doesn't have a spring loaded auto-transformation. Instead you manually put the parts into place as you would traditionally. Like with older beast era toys, much of the beast kibble folds around the robot parts as they tuck away into crevasses. This can be a little tricky as there are a few tabs that lock into place. If you don't get them right, nothing else will go right. 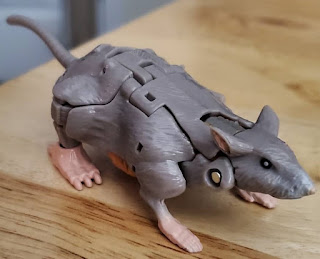 It's not terribly hard or anything, but the first time will definitely be a little frustrating. Unlike an original Beast Wars toy, Rattrap doesn't store his weapon within his beast mode. Instead it connects to the rat's side. I'm sure some folks are complaining about this, but the sight of a rat with a side mounted gun sells the idea to me quickly.

Rattrap is pretty great. A good update of a classic character that I'm happy with all around. He's got quite of lot of articulation for such a small toy and really delivers the update of an older design. I hope Kingdom is just the beginning of a Beast Wars renaissance. Buying beast era basics was a regular weekend occurrence when I was in college. Even though time has passed and a lot of things have changed, picking up small beast bots feels natural. So far Kingdom has been the best of both worlds. Traditional Transformers and beast era. It's exactly what I wanted then and I'll gladly take it now.