It's The Final Count... Faction 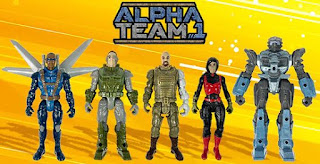 The Dollar Tree is one of my favorite stores to pop into. Between low priced household goods (the excuse for a visit) and random surprises (the reason for a visit) you can find a lot of neat things for not a lot of money.

Seemingly out of nowhere, Dollar Tree dropped their new exclusive sci fi toy line called 'Final Faction' sometime in November. It's pretty great and at a dollar each, it's easy to complete them all.

Alpha Team 1 (the good guys) vs the Kharn (the bad guys with the fate of the Earth left in the balance. The figures are 1:18 scale with five points of articulation (generally) which is a sweet spot for me.

The highlight of the line so far is the additional accessories sold separately in themed packs. Extra guns, weapon pods, and even flight packs can be attached to the figures for a level of customization I didn't expect.

There's more figures on the way and even a vehicle! The sculpting and paint isn't too bad either. I do anticipate some sweet custom work done on these. There's even an animated series on the Dollar Tree's YouTube channel. I've only gave it a quick glance, so I don't have much of an opinion yet. It does appear to be pretty kid friendly, which is what I'd expect.

It's hard not to like such a fun line with so much variety. Even harder not to like it at the super low price. I really like the colorful packaging and presentation of everything. The figures look familiar while being something new. 2020 has been a crazy year. Who'd ever think a Dollar Tree exclusive toy line would end it with such a mic drop?